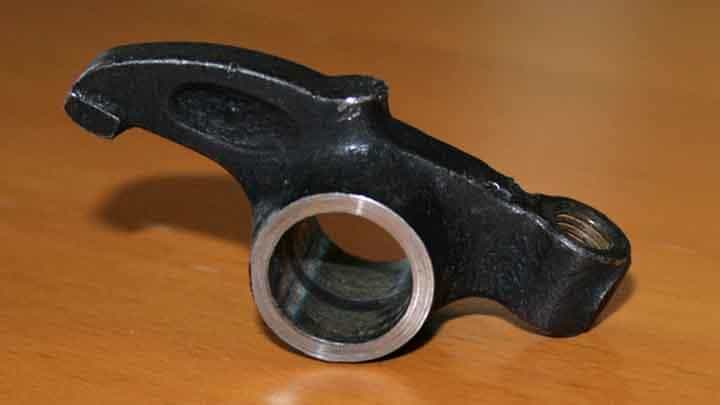 When the internal combustion engine generates power, it passes through the drivetrain so that it can be delivered to the driving wheels underneath the vehicle. The drivetrain has several different components which are vital to this entire process, such as the rocker arms. The intake valve and exhaust valve must be opened and shut at the appropriate times by the rocker arms for the engine to generate sufficient power. The pushrods assist the rocker arms in making sure they’re able to open and close these valves completely. The pushrods are associated with the camshaft. If the pushrods push up, the rocker arms push down. This downward pressure is directed toward the two valves in order to open or close them.

The rocker arms must stay functional or else your intake valves and exhaust valves won’t open and close at the appropriate times. Many noticeable symptoms will arise from this type of situation which will impede the performance of the engine. You’ll need to replace the faulty rocker arms quickly or else your engine may suffer irreversible damage.

Below are the top 5 symptoms of a bad rocker arm.

Since the drivetrain and rocker arms help the engine generate power and transfer it to the driving wheels, there will be a problem in this process if the rocker arms are damaged or not working properly. It won’t take long for you to experience a weak engine performance as a result of bad rocker arms. This is due to the intake valve and exhaust valve not being opened and closed at the appropriate times.

Do you notice strange noises coming from the drivetrain area of your vehicle. If so, then it could mean that you have one or more bad rocker arms. This happens if the pushrods are not able to push the rocker arms properly. If you hear any noises like this and you suspect they are coming from the rocker arms, then you’ll need to look at the rocker arms and push rods for yourself. That is the only way to verify the cause of these noises.

As you’re inspecting the pushrods and rocker arms, look at their overall condition. Do they look deteriorated or worn out? If so, there is no doubt that those components must be replaced immediately. Do not wait for their condition to get worse or else you’ll have worse problems in your vehicle.

Whenever you experience a weak engine performance, it is common for the Check Engine warning light to come on. Bad rocker arms can certainly be one of many reasons for this to happen.

If you’ve let the bad rocker arm situation get too bad, then your engine might stall on the road as you’re driving. The engine may stall at irregular rates until it shuts down completely and is unable to be started up again.

The Average Cost to Replace

The cost to replace one rocker arm is generally between $500 and $1,000. In most situations, you’ll probably have to replace multiple rocker arms too because they tend to wear out or go bad inside your vehicle at the same time. However, the extent of the replacement cost can be attributed to the labor charges of a professional auto mechanic. This is a very time-consuming replacement task, so their number of paid hours add up quickly.

Fortunately, you can purchase rocker arm replacement kits for about $200 to $350. You can use this kit to do the replacement job yourself and save a lot of money. The kids generally include the rocker arm, guide plates, pushrods, and other necessary components.  But if you only need the rocker arm part, then the cost just for that is around $15 to $200.

There are numerous types of rocker arms manufactured for vehicles. The differences between them relate to their levels of durability and friction. The most crucial difference is how they move the camshaft.

Below are the five types of rocker arms.

Roller tipped rocker arms are made of either aluminum or steel. They have rollers on the tips of the rocker arms to reduce friction and deterioration of the valve end. They move the rockers with a trunnion pivot nut to simplify the process.

Shaft rocker arms feature a shaft piece that goes through the heads of the rocker arms. The purpose of the shaft is to create more rigidity than you would get from a stud. When the valve train has increased rigidity, it has more control as you increase the engine’s revolutions per minute. This creates a stable and smooth driving experience.

Center pivot rocker arms work a little differently than conventional rocker arms. They require the camshaft to push the arms rather than the pushrods. The pivot point is located in the central region of the rocker arms, so they’re called “center pivot” rocker arms.

End pivot rocker arms are probably self-explanatory. The end of each rocker arm has a pivot point on it. The camshaft is located in the middle of the rocker arm to push down on the end pivot area.