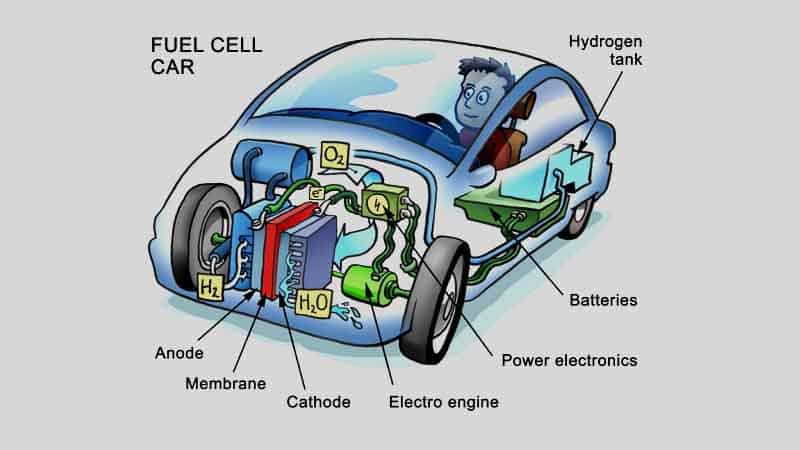 Most people are familiar with the type of electric car that uses a battery instead of an engine to provide power to the wheels. You can only drive for a certain number of hours before the battery runs out of power and needs to be recharged again.

However, there is another type of electric vehicle which uses fuel cells to move the wheels rather than a battery. The vehicle is called a fuel cell vehicle. Each fuel cell contains hydrogen gas which gets mixed with oxygen to produce an electrochemical reaction. The reaction is what produces the electricity needed to move the vehicle.

Fuel cells constantly need that electrochemical reaction to take place. Car batteries are different because the power-producing chemicals already exist inside of them. Fuel cells depend on outside oxygen to combine with its hydrogen gas.

Fuel cell vehicles have their advantages over a battery-powered electric vehicle. Here are the top five advantages below.

There is no burning gasoline in a fuel cell vehicle. Hydrogen is the main source of fuel, which means no carbon emissions get produced. Only water and heat come out of the tailpipe. This helps protect the environment and fight against global warming.

Like previously mentioned, fuel cell vehicles are powered by hydrogen. There is no gasoline or oil needed in these vehicles. As a result, there is no dependency on fossil fuels.

Fuel cell vehicles still need to be fueled up. But rather than going to a traditional gas station, you’ll need a fuel cell station which provides hydrogen-based fuel. Studies show that hydrogen fuel is more efficient than diesel or gasoline fuel.

When you’re driving your fuel cell vehicle, you will barely hear anything at all. Fuel cells go through an electrochemical reaction without making much noise. Compare this to the internal combustion reaction in a traditional vehicle and the noise that makes.

Most fuel cell vehicles are priced at about $50,000 and up. This is too expensive for the average consumer to afford. You’ll only find wealthier people driving such vehicles. Since the technology is still very new, you won’t see the price going down anytime soon.

Internal combustion engines are known for the massive amounts of power they generate. Unfortunately, fuel cell systems are not as powerful. In fact, they poorly perform when it is humid outside. Some people might not like such a lack of durability in their vehicle.

Fuel cell systems are certainly not too reliable. Since they are weaker fuel systems, it means that they’re less reliable fuel systems too. You can expect to have 50% of the reliability that you’d get from an internal combustion engine.

Since not too many people have fuel cell vehicles, there is not a lot of demand for hydrogen fuel stations. There are only a few such stations in the entire country. So, if you’re thinking about taking a road trip, then you might want to reconsider or else you’ll end up stranded on the interstate.